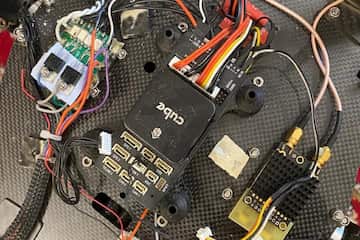 The drone shot down by J&Ok Police was assembled with components from China and Taiwan.

The IED-laden drone which was in July shot down by the Jammu and Kashmir police was a hexacopter and had two GPS put in to exactly drop the fabric at assigned location, a forensic investigation revealed.

In line with unique particulars accessed by CNN-News18, the flying object additionally had an automated house return facility and its flight controller was Hex Know-how Hong Kong.

“This drone has exact drop location via two GPS put in. This could fly with a most weight of 26kg. Its airframe was 10 kg and battery 10 kg. After its personal weight of 20 kg, it might carry solely 6 kg further. Its working frequency was 900-930 MHz and has a variety of 20 kms a method with a flying pace of 60 kmph,” the forensic particulars acknowledged.

“It has most flight time 40 minutes coming and going. This drone has flown for 14 hours up to now in accordance with its forensic which implies at the least 15 flights on this specific space,” in accordance with a preliminary evaluation.

After the incident, officers advised News18 that the drone flew over the border belt of Kanachak alongside the Worldwide Border (IB), was assembled with components from China and Taiwan.

“Curiously, the serial variety of the flight controller is a digit completely different from the drone which was present in Kathua final yr. This drone is an assembled one with some components from China, others from Taiwan,” ADGP, Jammu zone, advised News18.

The drone was flying about seven to eight kilometres contained in the border, the officers mentioned, including that it had six massive wings and was a tetra-copter. The IED materials was connected with the flying object and was meant to be assembled into an IED earlier than use, they mentioned.

On Friday, the Jammu and Kashmir police averted a cross-border terror plot by taking pictures down a drone carrying IED materials weighing 5 kg within the border belt of Jammu, officers mentioned. Instantly, a fast response workforce (QRT) of the police swung into motion and shot it down utilizing anti-drone technique within the early hours, they added.

“At about 1 am, the drone made a low flight to launch the payload (IED), when it was shot down,” Further Director Basic of Police (ADGP) Mukesh Singh advised reporters, including that the drone was carrying a payload of five-kilogramme IED materials in a semi-assembled state and solely wires needed to be related to it to set off a blast.